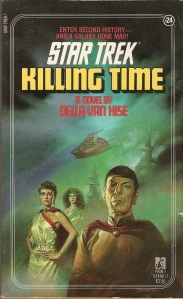 Title: Star Trek #24: Killing Time
Author: Della Van Hise
Published By: Pocket Books
Year Published: 1985
Page Count: 311
ISBN: 0-671-52488-7
Notes: Killing Time‘s plot revolves around the Romulan attempt to alter Earth history to prevent the formation of The United Federation of Planets. In many ways, it shares a similar plot, (though with a few major differences), with the 2009 Star Trek film, which, like Killing Time, are utterly forgettable save for their plot inconsistencies.

Time suffers from being published too early. What I mean is, the events which lead to the formation of the Federation were officially established in several places after the publication of this book. To whit: the UFP was formed in 2161, as stated on The Next Generation and shown in the last episode of Star Trek: Enterprise. Killing Time establishes the beginnings of the Federation in 2097.

In addition, the physics for time travel, the “sling-shot effect,” while well established in Trek lore by this point, seem shaky and inconsistent with even the standards laid down in the Original Series episode “The Naked Time.”

The central plot element, and the weakest as far as the physics of Trek-style time travel is concerned, is that being in ‘hyperspace’ (not warp space or in a static warp shell, as it should have been), would somehow protect the ship from the effects of the time alteration. It only affected Enterprise since they were at impulse (sub-light) speed when the Terminator like Romulan operatives struck at the foundational underpinnings of the Federation.

The main weakness here is that Star Fleet has many ships, many of which would’ve been at warp speed when the timeline was altered. Therefore, why didn’t any of those ships come into play?

Also, in the “Second History” of the altered timeline, the inhabitants somehow know that time has been altered because they have bad dreams and go crazy.

As a nominal sequel to Original Series episode “The Enterprise Incident,” Time does an adequate job of presenting the main characters subtly changed, though in place of the familiar Enterprise crew, the author opts to introduce Lieutenant Jerry Richardson, a navigator and S’Parva, a psychological crew member who’s a telepathic dog, essentially.

In the altered timeline, Spock is the Captain of the ShiKhar (the Enterprise‘s name is changed due to the influence of the Vulcans on early Federation history), Mister Chekov, normally an Ensign, is the ships First Officer, though his rank is not mentioned, it would, presumably be either Lieutenant Commander or Commander. Captain Kirk is an Ensign in the altered timeline. Everyone else, Mister Scott, Lieutenants Sulu and Uhura are all unchanged, as is Nurse Chapel and Doctor McCoy.

Sulu, Uhura, and Scotty barely have any presence in the book at all. In their place are the aforementioned S’Parva and Lieutenant (then Ensign in the altered timeline) Richardson, a move which doesn’t do the book any favors, frankly.

In addition, the chief Romulan antagonist, Thea, is the unnamed Romulan Commander from “The Enterprise Incident,” now the Romulan Praetor. Her co-conspirator, a science officer named Sarela is compelling enough to call for more screen time, though the author chooses to sideline her early on, after setting up political intrigue with her husband, and commanding officer, Tazol. Sadly, however, she becomes an afterthought to the central plot.

Grade: Poor. One and a half Goons out of Five. Read this only if you are a die-hard Star Trek fan and have a thirst for Star Trek stories.