My Total Party Kills, Part One

Posted on February 8, 2011 by WonderGoon

As some of you may know, I am an avid role-player. I enjoy all sorts of role-playing games, such as Dungeons and Dragons and Rolemaster. I want to tell you the story of three of my Total Party Kills (TPK’s).

One of these “filler” adventures was a module, now infamous amongst we old-timer AD&D players, called T1 The Village of Hommlet. Village of Hommlet was written by none other than Gary Gygax, the co-creator of Dungeons & Dragons. It was a pure death-fest waiting to happen.

See, in the old days, the modules were written with the idea that the players would explore three-to-five rooms, then rest for a night to regain hit points and spells. It was thought that by doing this, the players would be able to handle somewhat greater challenges than would be normal for their levels. T1 was written for 1st-3rd level characters and since my players were starting brand spanking new 1st level characters, I expected that in some encounters they’d have a tough time, but, using the “3-5 Rule” they’d be okay.

This was not to happen, though. 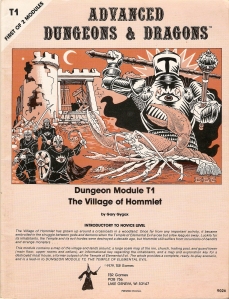 Should've been called the Moathouse of Painful DEATH!

My players, there were eight of them, had dutifully and with a minimum of winging about rolling only 3d6 once for each characteristic score, finished creating their characters. Of note was the parties Druid, but more on her later.

After a quick round of equipment buying, I began the adventure by saying something to the effect of, “You are in the village of Hommlet [I had changed the name of the village for my game to something else] and you’ve all heard the legends of the nearby moathouse, a bastion of evil that has terrorized the locals for sometime.” Or something to that effect.

The party, of course, was in the tavern and met there after listening to a few rumors and talking things out. After a few minutes of this, and a round of descriptions, the team of adventurers headed off to make trouble with the residents of the moathouse.

This would prove to be their undoing.

The group consisted of an elven ranger (a Drizzt clone, though not a drow), a paladin, a dwarf fighter, a wemic (part human/part lion, like a centaur is part human/part horse) thief, a human illusionist, a human monk, a half-elf cleric/magic-user, and the druid I mentioned earlier.

They lost the ranger to the bandits in the upper reaches of the crumbling structure. As I recall, he got peppered by crossbow bolts and died rather badly.

The wemic thief died when he ran into a room and didn’t realize the niches to either side of the room contained zombies that only activated when someone walked past the niche. He was cutoff and pummeled to death. The paladin was trying to organize a defense against them, but the cleric/mage (who didn’t bother to try to turn them) fell to them as well.

Later, the paladin and the dwarf fighter fell against the ogre in another room. The paladin, again, was trying to organize a defense and fighting withdrawal, but some of the other players weren’t listening.

The monk and the illusionist died in a stairwell on their way out when they hit a rather large patch of green slime. There is a larger patch in that stairwell, now.

That left the druid. She got away and lived to tell the tale.

What was so bad about all this, besides the bad tactics and not listening to each other, was that my players, my patient players, sat down, some still laughing, and made up a new batch of 1st level characters to go back in and finish the job.

While they did that, I calculated XP for the druid and informed her of her new total.

After the second group was created, I again began the adventure by saying, “You are in the village of Hommlet and you’ve all heard the legends of the nearby moathouse, a bastion of evil that has terrorized the locals for sometime.” Smiling, and knowing what was coming, they again entered the moathouse for another go. I forget the makeup of this second group, though. In the end, it didn’t matter. The druid, that ever resourceful druid, was the only character to survive the moathouse a second time.

While the players sat and created new characters, I, again, calculated the XP for the druid. This time, she had gained enough to be 2nd level and I allowed her to advance.

Again, laughing, some giving me stink eye, the players sat down and generated a third group of characters. After this was done, I, again, began the adventure by saying, “You are in the village of Hommlet and you’ve all heard the legends of the nearby moathouse, a bastion of evil that has terrorized the locals for sometime.”

Cries went up and paper wads flew at my face. “Enough!” They shouted. The moathouse would have to wait until they were higher level. They moved off to find adventure elsewhere.

That third group of adventurers lasted for sometime, with the party finally getting to 6th-9th level before inter party conflict (and conflict among the players) tore the group up for a bit. Still, it was fun while it lasted.

So, that’s my TPK (well, almost) for Advanced Dungeons & Dragons, 1st Edition. Tomorrow, I’ll tell you about my true TPK in HERO Games’ “Day of the Destroyer” module.

5 Responses to My Total Party Kills, Part One