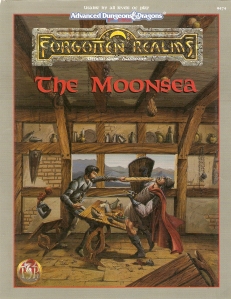 Take a close look at the cover for The Moonsea. The book was written for the Forgotten Realms setting for AD&D 2nd Edition. This is one of my favorite covers from any sourcebook or module printed by, then, TSR (later to be subverted by Wizards of the Coast).

The reason why I love this cover is not for the artwork, which is fine, but what the person on the left is doing. He’s parrying a sword thrust with a fork and counterattacking with a loaf of bread! How cool is that?

You don’t see this in everyday role-playing games, since everyone is so scared of their characters being scratched or wounded. If I could ever see this in a game, I would award extra XP to that player for attempting something new.

The man on the left doesn’t appear to be armed, but I know if this was a player character, he would have six to eight weapons on his person just to eat (and that’s after the player decides to go lightly armed).

I think the desire to not be harmed stems from the desire to not be thought of as a fool or a poor player for being caught without a weapon, even if that’s exactly what the character would, (or should), do. Players want every advantage, and in the players mind, being unarmed is tantamount to giving up an advantage.

Think of the great fantasy epics you’ve seen at the movies. Take The Lord of the Rings: The Two Towers. Remember the scene where Aragorn and Gimli are outside Helm’s Deep and they need to stave off the Orc attack long enough for Theodin to block up the breach in the gates?

Remember what happened? Aragorn threw Gimli into the mix and then jumped into the fray right after him. A heroic action that was rare enough in AD&D gaming, and totally absent from any D&D 3.x-4.x gaming. Players take it too safe when it comes to grand adventuring and taking risks. (And woe to any player who had to >GASP!< rely on another player for something!)

One gaming group that I was familiar with for a short time mocked anyone who failed a skill check, as if it is somehow the players fault that the d20 didn’t roll high enough. One player I’m familiar with once said that any character he played must have an 18 in at least one stat or the character was useless to him and not worth his time.

The benefits of failure in heroic role-play are pretty obvious. How many stories are exchanged around gaming tables of some memorable event occurred to save the party? How many times has one of those memorable events been something disastrous?

It’s a crying shame that players are too much focused on what bonuses they receive and focus so little on the aspects of role-playing these days. The size of your skill bonus does not equal the worth of your character (or your playing ability). Nor does how well you roll the dice.

Focusing too much on bonuses removes those potential disasters, and great stories, from ever happening. This is the real crime of forgetting how to role-play, since those stories are what we, as experienced gamers, use to tell newer players what to expect; both the good and the bad.

If you are a table-top gamer, I bet you’ve got some stories. If you do, even if it’s one I was there for, share it in the comments section. I’d love to hear them again.

WonderGoon is seeking enlightenment and questions everything.
View all posts by WonderGoon →
This entry was posted in Entertainment, Gaming and tagged 3.0, 3.5, 4.0, 4.5, AD&D, Aragorn, D&D, D20, Gaming, Gimli, Heroic, Lord of the Rings, Orc, Role-play, RPG, Theodin, TSR, Wizards of the Coast. Bookmark the permalink.